I know this is an awful thing to say, and Alzheimer’s is an awful disease, but I reckon Margaret Thatcher was lucky to lose her mind.

Recorded and mixed in August 1982 at Southern Studios, London. Packaged in a fold-out sleeve with inner sleeve with printed lyrics. 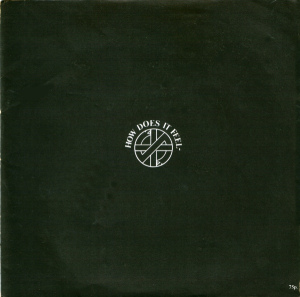 Crass released another single: ‘How Does It Feel To Be The Mother Of A Thousand Dead?’ A direct attack on Thatcher, it came in a black sleeve decorated with white graveyard crosses. When, during Prime Minister’s Question Time,Thatcher was asked if she’d heard the record, things were getting serious.

‘The Conservative Party attempted to fight back, as the Guardian reported: “The Attorney General, Sir Michael Havers, has been asked by the Conservative MP for Enfield North, Mr. Tim Eggar, to prosecute an Anti-Falklands war record under the Obscene Publications Act. The record, ‘How Does It Feel To Be The Mother of 1,000 Dead?’, by the group Crass, which also owns the record company Crass Records, which released it, is said to have sold 20,000 copies since it was issued last Saturday. It refers to Mrs. Thatcher and the decision to send the Task Force. “You never wanted peace or solution, from the start you lusted after war and destruction… Iron Lady, with your stone heart, so eager that the lesson be taught that you inflicted, you determined, you created, you ordered… It was your decision to have those young boys slaughtered.”

Read more about the history to this recording HERE.