The Boswell Sisters were a close harmony singing group that attained prominence in the USA in the 1930s.

Sisters Martha Boswell (June 9, 1905 – July 2, 1958), Connee Boswell (December 3, 1907 – October 11, 1976), and Helvetia “Vet” Boswell (May 20, 1911 – November 12, 1988) were raised by a middle-class family on Camp Street in uptown New Orleans, Louisiana. They came to be well known in New Orleans while still in their early teens, making appearances in local theatres and radio, and their first recordings for Victor Records in 1925. However, the Boswell Sisters did not attain national attention until they moved to New York City in 1931 and started making national radio broadcasts. After a few recordings with Okeh Records in 1930, they made numerous recordings for Brunswick Records from 1931-1935. These Brunswick records are widely regarded as milestone recordings of vocal jazz. 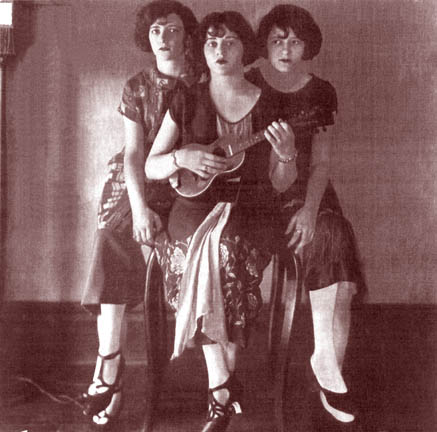 Connee’s ingenious reworkings of the melodies and rhythms of popular songs, together with Glenn Miller’s hot arrangements, and first rate New York jazz musicians (including The Dorsey Brothers, Benny Goodman, Bunny Berigan, Fulton McGrath, Joe Venuti, Arthur Schutt, Eddie Lang, Joe Tarto, Manny Klein, Dick McDonough, and Carl Kress), made these recordings unlike any others. Melodies were rearranged and slowed down, major keys were changed to minor keys (sometimes in mid-song) and rhythmic changes were par for the course. Interestingly, the Boswell Sisters were among the very few performers allowed to make these changes to current popular tunes as during this era, music publishers and record companies pressured performers not to alter current popular song arrangements).

The Boswell Sisters were inducted into the Vocal Group Hall of Fame in 1998.