A year or so ago, some colleagues of mine did a campaign for a film called Night Drive, which was a slashy, schlocky horror that centred on the body-parts-for-muthi trade. The campaign handed out a couple hundred pamphlets, in the style of those ridiculous pamphlets that offer penis enlargement, bad luck cure, womb cleaning etc that we see littered around town every day. The pamphlets offered money for body parts, and linked to a website that detailed the “doctor’s” cash-for-organs trade in more detail. The people who received the pamphlets went ape-shit, calls were made to the national media, everyone was pranked and much outrage ensued. The campaign was slammed by the Department of Health for trivialising a “Serious Problem”, and was pulled, effective immediately, complete with apology from the ad agency in question, and a promise to conduct an “internal disciplinary procedure”.

My question is, what exactly is being done about this serious problem? Why do people get up in arms about a cash-for-body-parts hoax, but think its OK (and hilarious) for there to be pamphlets offering safe abortions, womb cleaning, AIDS cures and a whole manner of sexual health treatment that is not only bogus, but seriously harmful to those who pursue it. What effort is being made by the Department of Health to shut down these “doctors”? Most disturbing is the discriminatory gender ideas at the root of these so called treatments. Muthi to “make lover have sex with you”, and treatment for women for, among other things “cleaner vaginas, more willingness to have sex.”

These charlatan muthi men make a mockery of traditional healing, and the pamphlets and posters not only mislead the poor, vulnerable and uneducated, but reinforce negative stereotypes about traditional healing and the communities that take advantage of them. Is any work being done to address this “Serious Problem”, or do people only care so long as the content of said media panders to savage stereotypes of murderous muthi men lurking in the shadows to chop your heart out? 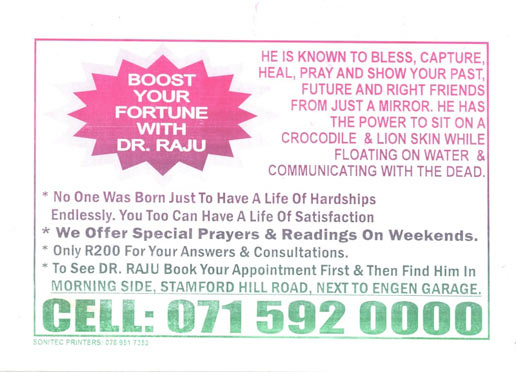