Animator Nina Paley, she of the wonderful public domain film Sita Sings the Blues (WATCH IT, please, if you haven’t yet!), also made another short cartoon a while back*, this one caricaturing the ongoing conflict in the Middle East.

So, who’s killing who? Nina has provided a handy guide to the various historical groups HERE.

*Please do note that this was made in 2012, before the most recent turn of events.

This deserves to be heard. The cynical manipulation and deception happening will blow your mind. This talk by ex-Israeli Defence Force soldier Eran Efrati was filmed in Denver, Colorado on March 3, 2014 as part of The Soldier and the Refusenik U.S. tour with Maya Wind. Eran talk about his experiences in the Israeli Defence Force (IDF) and then more broadly discusses Israel, its relationship to the U.S. and the global expansion of militarism.

Eran Efrati, 28, was born and raised in Jerusalem. After graduating high school he enlisted in the IDF, where he served as a combat soldier and company sergeant in Battalion 50 of the Nachal Division. He spent most of his service in Hebron and throughout the West Bank. In 2009, he was discharged and joined Breaking the Silence, an organization of veteran Israeli soldiers working to raise awareness about the daily reality in the Occupied Territories.

He worked as the chief investigator of the organization, collecting testimonies from IDF soldiers about their activities. He also guided political tours and to the West Bank and worked to educate Israeli youth about the reality of being a soldier in an occupying army. His collected testimonies appear in the booklet “Operation Cast Lead” and their most recent release “Our Harsh Logic”.

Since leaving Breaking the Silence, his investigative reports appeared in The New York Times, The Washington Post and The Guardian. Today he is active with the Israeli groups Anarchists Against the Wall and Boycott from Within. 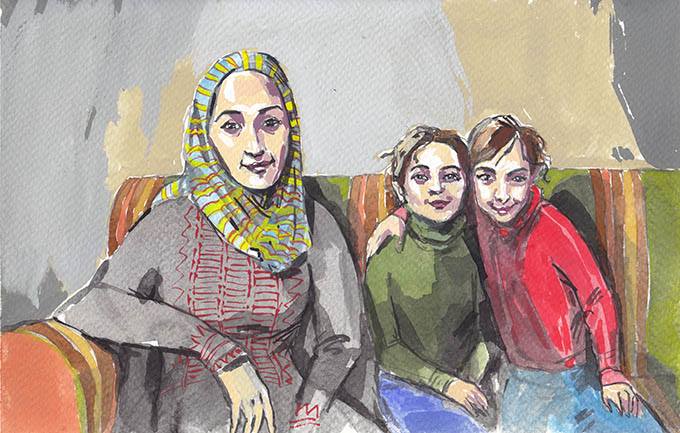 Q: Lizza, did you paint this from a photo? I want to post these on Fleurmach and include context if there is some.

A: The likenesses are so bad there’s not much point referring to the originals… which I guess is a good thing, because I don’t feel like I’m violating anyone’s privacy. I’ve been working in a way where I strive for immediacy by going straight into paint with no pencil work underneath, so it’s pot luck how it turns out. The subjects are Palestinian though, I can say that much! I wanted to be sure to get a mood which is realistic. I want to do more of people in Palestine being human.

They call us now.
Before they drop the bombs.
The phone rings
and someone who knows my first name
calls and says in perfect Arabic
“This is David.”
And in my stupor of sonic booms and glass shattering symphonies
still smashing around in my head
I think “Do I know any Davids in Gaza?”
They call us now to say
Run.
You have 58 seconds from the end of this message.
Your house is next.
They think of it as some kind of war time courtesy.
It doesn’t matter that
there is nowhere to run to.
It means nothing that the borders are closed
and your papers are worthless
and mark you only for a life sentence
in this prison by the sea
and the alleyways are narrow
and there are more human lives
packed one against the other
more than any other place on earth
Just run.
We aren’t trying to kill you.
It doesn’t matter that
you can’t call us back to tell us
the people we claim to want aren’t in your house
that there’s no one here
except you and your children
who were cheering for Argentina
sharing the last loaf of bread for this week
counting candles left in case the power goes out.
It doesn’t matter that you have children.
You live in the wrong place
and now is your chance to run
to nowhere.
It doesn’t matter
that 58 seconds isn’t long enough
to find your wedding album
or your son’s favorite blanket
or your daughter’s almost completed college application
or your shoes
or to gather everyone in the house.
It doesn’t matter what you had planned.
It doesn’t matter who you are
Prove you’re human.
Prove you stand on two legs.
Run.