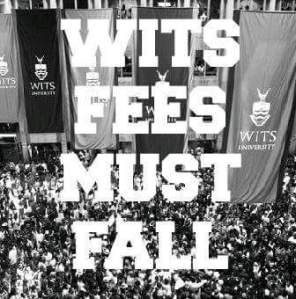 Today, 04 April 2016, a group of students attempted to shut down Wits University in the name of Wits Fees Must Fall. These students were comprised of some members of the Wits student body and other popular faces from the #Fallist movements throughout the country. Leaders of this movement have been quoted in media confirming the shutdown as an act in solidarity with suspended, intimidated and deregistered from Wits as of today, 04 April 2016 as well as the continued struggle against outsourcing of workers on university campuses.

Through reliable sources and substantive evidence, we know that the plan to shut down the Wits campus was discussed at a private symposium this past weekend, convened under the banner of Fess Must Fall, the invite to which was not extended to the broader Fees Must Fall movement on different campuses as well as the explicit exclusion of feminist and queer persons. The feminist and queer bodies that have continued to challenge the problematic and archaic investment in the institutions of patriarchal masculinities by student leaders who have continued to erase and silence their narratives and participation in the struggle for free decolonised education and outsourcing.

As a collective, the democratic process of convening and mandating members to attend Fees Must Fall related events has always been one that is consultative and open. The collective mandates representatives at each turn as the movement maintains a flat democratic structure. Therefore, the symposium of the past weekend, facilitated through external funders that seek to infiltrate the movement, and the employ of what we suspect to be non Wits students and members of the public, is one we do not recognise and refuse to be held hostage by its political dictates and ambitions.

We have maintained our integrity as an intersectional; student led non partisan movement that is fighting for free decolonised education and the insourcing of workers.

As a movement, we fully support the disruption of systems of power that have continued to exclude black students from accessing the higher education space as well as the outsourcing and dehumanisation of black workers on campuses. However, we will never tolerate a situation in which these disruptions are allowed to happen at the expense of queer and feminist bodies wherein their bodies are only utilised for the purposes of protecting heterosexual black men on the firing line.

Since the inception of the #Fallist movements, the student’s movements have been plagued by incidences and complaints of latent and rampant misogyny, sexism, patriarchy, homophobia and transmisogyny and this must come to an end. The disruption of the shut down this morning was a step towards disrupting this problematic trend where feminist and queer bodies are only good to be used for protecting heterosexual black men.

All identities of Blackness will be included in this revolution or it will be bullshit!

To all Feminist, Queer, Trans and marginalised bodies, we are convening at the Revolutionary benches (Green benches in front of Umthombo Building) from 10:30 on 05 April 2016. 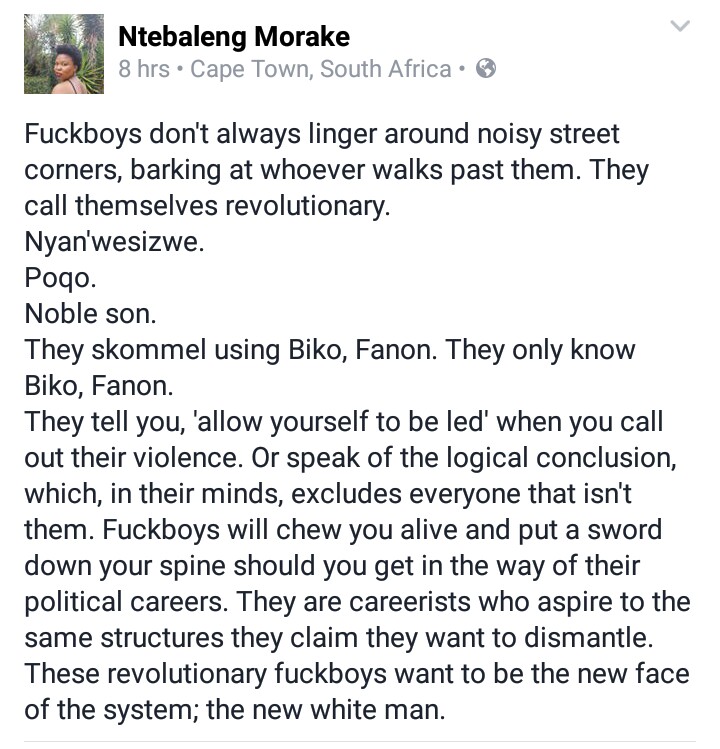