This play is on for two more nights at the Intimate Theatre on UCT’s Hiddingh Campus. I went last night. It is an absolute tour de force – insightful, brutal, awkward, compassionate, hilarious. If you are in Cape Town, GO, GO, GO! 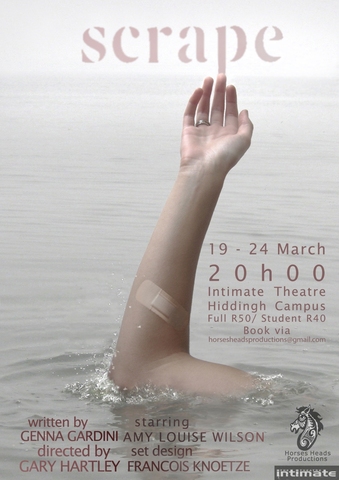 Scrape is the story of an everyday woman suffering from an unusual condition.

After falling and scraping herself, Beth discovers that not only does skin heal, it can sometimes do so with a vengeance.

Scrape is presented by the new theatre company Horses’ Heads Productions. The production will preview at the Intimate Theatre from 19 – 24 March 2013 and go on to feature as part of The Cape Town Edge programme at this year’s National Arts Festival. Scrape will then return to the Mother City for a run at The Alexander Bar in August 2013.

Director:
Gary Hartley is a theatre-maker, performer and television producer based in Cape Town. In 2007 he graduated from Rhodes University with a distinction in Drama. His production, WinterSweet, made in collaboration with The Runaway Buni Collective and writer Genna Gardini, won a Standard Bank Ovation Encore prize at the 2012 National Arts Festival. He currently works as a writer and producer at Greenwall Productions and has produced for shows such as The Showbiz Report, The Close Up and Screentime with Nicky Greenwall.

Playwright:
Genna Gardini is a writer based in Cape Town. Her play WinterSweet was produced in collaboration with Gary Hartley and The Runaway Buni Collective for the 2012 National Arts Festival and won a Standard Bank Encore Ovation Award. She has curated The Readings Upstairs, a monthly series of play readings held upstairs at the Alexander Bar, since 2012. Her work as a poet has been published widely both locally and internationally. Gardini has presented papers at the 2012 AFTA Annual International Conference and GIPCA Directors and Directing: Playwrights Symposium. She also works as a freelance arts writer for various publications, including the Cape Times and Art South Africa magazine. She is currently completing her MA Theatre-making (Playwriting) at UCT.

Performer:
Amy Louise Wilson is an actress living in Cape Town. She has studied Acting and Contemporary Performance at Rhodes University; Processes of Performance and Shakespeare Studies at the University of Leeds and Theatre and Performance at the University of Cape Town. Recent performances include The Petticoat Chronicle (dir. Lynne Maree), Voiced (under Clare Stopford) and 2012’s Standard Bank Encore Ovation Award winning Wintersweet (dir. Robert Haxton). She will be presenting her paper ‘Performance, Persona and Identity in the work of Die Antwoord’ at the New Directions in South African Theatre Today: Circulation, Evolutions, Adaptations symposium in France later this year.

Set Designer:
Francois Knoetze is an artist based in Cape Town. Having recently completed his Honours in Fine Art at Rhodes University, he is currently pursuing his MFA at Michaelis. His work is multidisciplinary, incorporating performance, assemblage sculpture and film. In 2011 he was a finalist in both the Absa L’Atelier and Sasol New Signatures competitions. Last year he was named one of Art South Africa magazine’s Bright Young Things. He has been involved in numerous theatre productions as set designer and puppet-maker, including works by the UBOM! Eastern Cape Theatre Company.

Sound designer:
Writer, journalist, musician and filmmaker SIYA IS YOUR ANARCHIST has written for publications like the Sunday World, The Event and The Callsheet. He has performed at the National Arts Festival and written several plays. He has also worked for TV shows such as Rhythm City (E-TV), Font (SABC 3), Breaking New Ground (SABC 2). He directed an SABC2 documentary on Aids activist Zackie Achmat called His Husband in 2011 and has exhibited multi-media installations for Goodman Gallery Cape Town and GIPCA Live Art Festival. He now works for Entertainment Africa as a features writer and is combining writing, music, art and media for the release of his upcoming musical EP.