Thanks to the flaneurs, the bricoleurs, the lovers of this little edifice. First post was HERE.

Happy birthday, Joni. An orchestral live performance in 2000 of her song that was first released in 1969.

(Thanks to Debbie Pryor for sharing this today.) 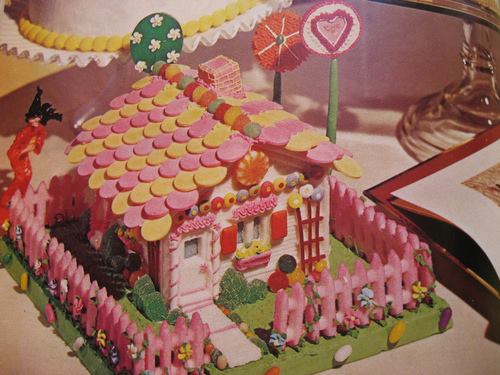 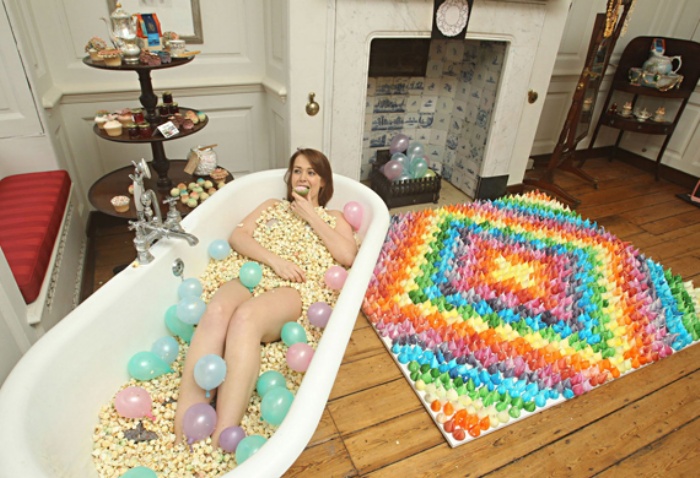 The world’s first “hotel” made entirely from cake is to welcome guests for one night only with room service in the form of vanilla sponge cushions and a hand-stitched meringue rug. The hotel within a hotel in Soho, central London, is the creation of more than 14 artists who spent 2,000 hours baking and 900 hours decorating with more than 600 kilos of sugar.

Guests will be encouraged to eat their way through windows and walls clad with 2,000 macaroons, a rug made from 1,081 meringues hand-stitched together, 20 kilos of marshmallow garlands, windowsills built entirely from fudge and a bath filled with caramel-coated popcorn.

It’s Fleurmach’s first birthday! To celebrate, here is a ground-shifting text, a manifesto of sorts, from Hélène Cixous back in 1976 (the year punk broke). If you haven’t ever read Cixous (and even if you have, once upon a time), do yourself a favour and plough through this, SERIOUSLY. I tried to excerpt chunks from it (and may still), but decided that it’s really important and enriching to read the piece in its entirety.

Thank you all for your ongoing support and contributions to the Fleurmach community.

I shall speak about women’s writing: about what it will do. Woman must write her self: must write about women and bring women to writing, from which they have been driven away as violently as from their bodies – for the same reasons, by the same law, with the same fatal goal.

Woman must put herself into the text – as into the world and into history – by her own movement.

The future must no longer be determined by the past. I do not deny that the effects of the past are still with us. But I refuse to strengthen them by repeating them, to confer upon them an irremovability the equivalent of destiny, to confuse the biological and the cultural. Anticipation is imperative.

Since these reflections are taking shape in an area just on the point of being discovered, they necessarily bear the mark of our time-a time during which the new breaks away from the old, and, more precisely, the (feminine) new from the old (la nouvelle de l’ancien). Thus, as there are no grounds for establishing a discourse, but rather an arid millennial ground to break, what I say has at least two sides and two aims: to break up, to destroy; and to foresee the unforeseeable, to project.

I write this as a woman, toward women. When I say “woman”, I’m speaking of woman in her inevitable struggle against conventional man; and of a universal woman subject who must bring women to their senses and to their meaning in history. But first it must be said that in spite of the enormity of the repression that has kept them in the “dark” – that dark which people have been trying to make them accept as their attribute – there is, at this time, no general woman, no one typical woman. What they have in common I will say. But what strikes me is the infinite richness of their individual constitutions: you can’t talk about a female sexuality, uniform, homogeneous, classifiable into codes – any more than you can talk about one unconscious resembling another.

Women’s imaginary is inexhaustible, like music, painting, writing: their stream of phantasms is incredible.

I wished that that woman would write and proclaim this unique empire so that other women, other unacknowledged sovereigns, might exclaim: I, too, overflow; my desires have invented new desires, my body knows unheard-of songs. Time and again I, too, have felt so full of luminous torrents that I could burst – burst with forms much more beautiful than those which are put up in frames and sold for a stinking fortune. And I, too, said nothing, showed nothing; I didn’t open my mouth, I didn’t repaint my half of the world. I was ashamed. I was afraid, and I swallowed my shame and my fear. I said to myself: You are mad! What’s the meaning of these waves, these floods, these outbursts?

Where is the ebullient, infinite woman who, immersed as she was in her naïveté, kept in the dark about herself, led into self-disdain by the great arm of parental-conjugal phallocentrism, hasn’t been ashamed of her strength? Who, surprised and horrified by the fantastic tumult of her drives (for she was made to believe that a well-adjusted normal woman has a … divine composure), hasn’t accused herself of being a monster?

Who, feeling a funny desire stirring inside her (to sing, to write, to dare to speak, in short, to bring out something new), hasn’t thought she was sick? Well, her shameful sickness is that she resists death, that she makes trouble.

And why don’t you write? Write! Writing is for you, you are for you; your body is yours, take it. I know why you haven’t written. (And why I didn’t write before the age of twenty-seven.) Because writing is at once too high, too great for you, it’s reserved for the great – that is, for “great men”; and it’s “silly.” Besides, you’ve written a little, but in secret. And it wasn’t good, because it was in secret, and because you punished yourself for writing, because you didn’t go all the way; or because you wrote, irresistibly, as when we would masturbate in secret, not to go further, but to attenuate the tension a bit, just enough to take the edge off. And then as soon as we come, we go and make ourselves feel guilty – so as to be forgiven; or to forget, to bury it until the next time.

Write, let no one hold you back, let nothing stop you: not man; not the imbecilic capitalist machinery, in which publishing houses are the crafty, obsequious relayers of imperatives handed down by an economy that works against us and off our backs; and not yourself.

END_OF_DOCUMENT_TOKEN_TO_BE_REPLACED

This is a page taken from FLEURZINE, a zine curated and illustrated by Julia Mary Grey. You can go and download this beautiful work of art for free on her site, HERE.

The name was inspired by Fleurmach, and six pieces of writing from this blog appear in the publication. This piece is by Fleurmach curator Cherry Bomb and was first posted HERE.