Do you think that flying round repeatedly in a circle, as happens on a certain kind of roundabout, do you think this might have a temporary effect – for purely physiological reasons – on the brain?

It can induce a sense of giddiness…

I mean more. Could character temporarily be changed by it?

Please explain, said Monsieur Hennequin, what you have in mind. 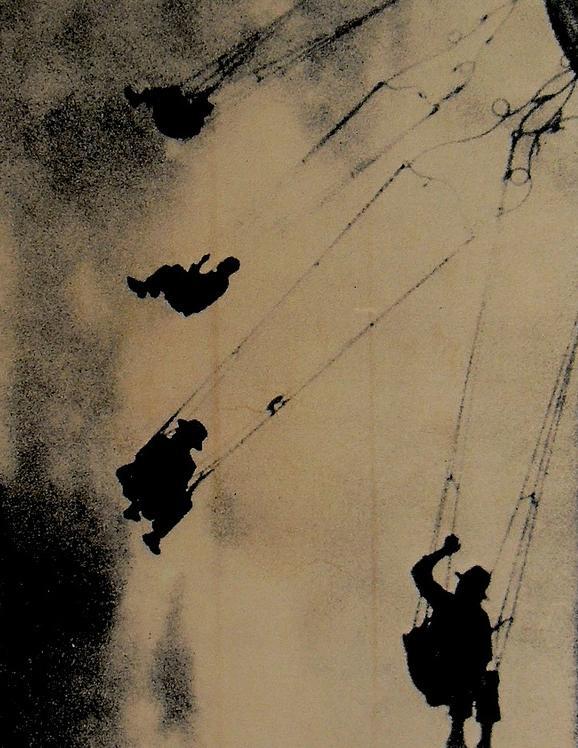 At these fairs there is a special kind of roundabout, a combination of a roundabout and a series of swings. The seats are suspended and when they turn –

A centrifugal force comes into play, said Monsieur Hennequin, and they are thrown outwards. I have seen the kind of which you are speaking. We call them les petites chaises.

Good. Now you can control – up to a point – how you swing outwards and in what direction. It’s all a question of how far you lean back, how high you push your feet up, how you swing with your shoulders and how you pull with your arms on the chains either side. It’s not very different from what every girl learns on an ordinary swing.

The game which most of the riders play as soon as the roundabout starts to turn, is to try to swing themselves near enough to whoever is behind or in front of them so as to join hands with them and then to swing together, as a pair, holding on to each other’s chains. It’s quite difficult to do this, often only their fingertips touch –

The seats are spaced in such a way, interrupted Monsieur Hennequin, to ensure that they never come into contact. Otherwise it could be dangerous.

Exactly. But everyone who rides on this kind of roundabout is transformed. As soon as it begins to turn and they begin to gain height as they swing out, their faces and expressions are changed. They leave the earth behind them, they throw back their heads and their feet go up towards the sky. I doubt whether they even hear the music which is playing. Each tries to take hold of the arm trailing in front of him, they cry out in delight as they gather speed, and the faster they go, the freer they play, as they rise and fall, separate and converge. The pairs who succeed in holding on to one another fly straighter and higher than the rest. I have watched this many times and nobody escapes the transformation. The shy become bold. The awkward become graceful. Then when it stops most of them revert to their old selves. As soon as their feet touch the ground, their expressions again become suspicious or closed or resigned. And when they walk away from the roundabout, it is almost impossible to believe that they are the same beings, men and women, who a moment ago were so free and abandoned in the air.