My cousin Paul Davey is a Zimbabwean-born photographer, writer and graphic designer living in London. Growing deathly bored with commercial shoots, he found renewed inspiration by getting onto the capital’s streets and shooting 40 000 protest photos last year. He put them into the book This Is What Democracy Looks Like – a chant frequently heard at protests – resulting in a lively collection of images of people, protests and events from 2012 in London, particularly the Occupy movement.

It’s essentially a book of portraits, portraying the often eccentric, artistic and highly intelligent protestors, and it offers a glimpse – usually not shown by mainstream media – of who they are, what they believe and the events they are caught up in, as they try to change the world in which they live.

Civic protest is definitely alive and kicking in good ol’ Blighty, and the reader will gain some insight into how their system attempts to control uprisings. Our South African police could learn a thing or two from the British bobbies – for instance, they employ a technique called ‘kettling’ in which they surround the crowd of dissenters, with the police linking arms, and contain the protestors until their bladders are full and their steam cools off.

Paul also interviewed many of the people he shot; you can read the interviews on http://www.huffingtonpost.co.uk/paul-davey/. Here is a sample, from a man known as Dom.

How long have you been in the camp? I first visited St Paul’s four days into their process.

What were you doing before you joined the Occupy movement? I was trying to live outside the system of control. I was living in the wild in the hills of Wales. I came here to Babylon from nature. Three years ago I was doing a law degree, but left that. It was the system and I didn’t want to be part of it.

Are you a full time resident in the camp? No. I’m not resident of anywhere I park my body. I live outside the system of control, outside of the others’ world.

Do you have a specialist role in the camp? I speak my truth.

What compelled you to become an Occupier? Staying in the ‘now’ brought me here.

How will you as an individual make a difference? By sharing my knowledge, because knowledge has value and [through knowledge] becoming rich in friends.

Who is your Enemy Number One? The Tavistock Institute and Common Purpose.

Who do you admire? Everyone. Everyone has something that makes them special.

Why? We can all learn from each other. If only we could all see each other as teachers.

What is the best part of being in Occupy? To expose Occupy for what it is. Exposing the orchestration.

What is the worst part? Occupy is a leaderless movement but there is a hidden hierarchy trying to control others. It is like a [government] social experiment.

Is Occypy making a noticeable difference? No. It is not here for that. It’s a social manipulation experiment.

Why? It has Common Purpose facilitators and Tavistock Institute workshops.

To purchase the book This is What Democracy Looks Like visit http://www.blurb.co.uk/bookstore/detail/3901497 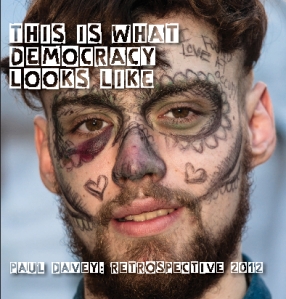