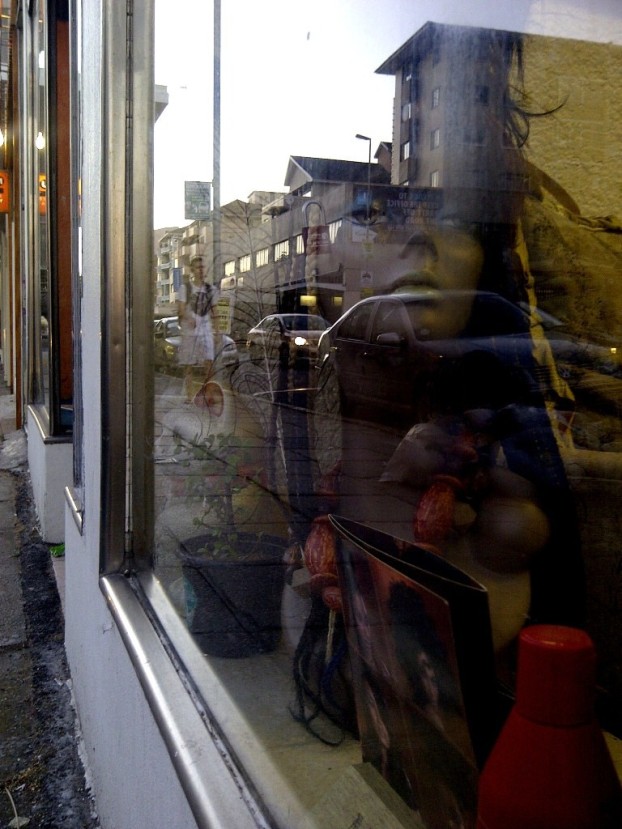 the city is a woman, bigger than any other…

…the sun rose from behind the gasometers at six-thirty a.m.
crept through the gap in your curtains
and caressed your bare feet poking from beneath the floral sheets.
i watched it flaking bits of varnish from your nails
trying to work its way up under the sheets.
even the sun’s on heat today;
the whole city getting stiff in the building heat.

now i’m trying hard to meet her but the fares went up at seven
she is somewhere in the city, somewhere watching television
watching people being stupid, doing things she can’t believe in
love won’t last ’til next installment
ten o’ clock on tuesday evening
the world is going on outside, the night is gaping open wide
the wardrobe and the chest of drawers are telling her to go outdoors
he should have been here by this time, he said that he’d be here by nine
that guy is such a prick sometimes, i don’t know why you bother, really.

oh babe oh i’m sorry
but i had to make love to every crack in the pavement and the shop doorways
and the puddles of rain that reflected your face in my eyes.
the day didn’t go too well.
too many chocolates and cigarettes.
i kept thinking of you and almost walking into lamp-posts.
why’s it so hot?
the air coming up to boil; rubbing up against walls and lamp-posts trying to get rid of it.
old women clack their tongues in the shade of crumbling concrete bus shelters.
dogs doing it in central reservations and causing multiple pile-ups in the centre of town.
i didn’t want to come here in the first place
but i’ve been sentenced to three years in the housing benefit waiting room.
i must have lost your number in the all-night garage
and now i’m wandering up and down your street, calling your name, in the rain
whilst my shoes turn to sodden cardboard.
where are you? (where are you?)
where are you? (where are you?)

i’m still trying hard to meet you, but it doesn’t look like happening
‘cos the city’s out to get me if i won’t sleep with her this evening
though her buildings are impressive and her cul-de-sacs amazing
she’s had too many lovers and i know you’re out there waiting
and now she’s getting into bed; he’s had his chance now it’s too late
the carpet’s screaming for her soul, the darkness wants to eat her whole
tonight must be the night it ends
tomorrow she will call her friends and go out on her own somewhere
who needs this shit anyway?
and listen, i wandered the streets the whole night crying, trying to pick up your scent
writing messages on walls and the puddles of rain reflected your face in my eyes.
we finally made it on a hill-top at four a.m.
the whole city is your jewellery-box; a million twinkling yellow street lights.
reach out and take what you want; you can have it all.
gee it’s so hot tonight!
i didn’t think we were gonna make it.
it was so bad during the day, but now i’m snug
and warm under an eiderdown sky.
all the things we saw:
everyone on park hill came in unison at four-thirteen a.m.
and the whole block fell down.
the tobacconist caught fire, and everyone in the street died of lung cancer.