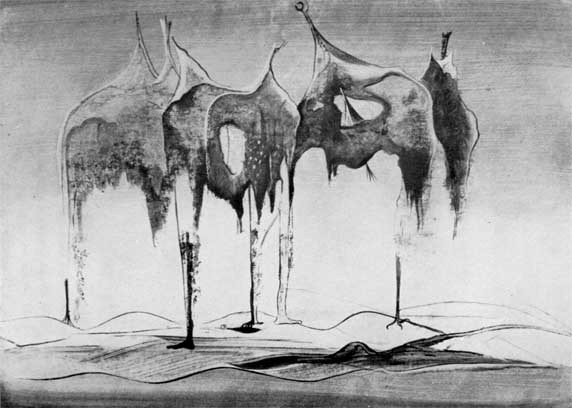 Edgar Jené. The Sea of Blood Covers the Land.

I am supposed to tell you some of the words I heard deep down in the sea where there is so much silence and so much happens. I cut my way through the objects and objections of reality and stood before the sea’s mirror surface. I had to wait until it burst open and allowed me to enter the huge crystal of the inner world. With the large lower star of disconsolate explorers shining above me, I followed Edgar Jené beneath his paintings.

Though I had known the journey would be strenuous, I worried when I had to enter one of the roads alone, without a guide. One of the roads! There were innumerable, all inviting, all offering me different new eyes to look at the beautiful wilderness on the other, deeper side of existence. No wonder that, in this moment when I still had my own stubborn old eyes, I tried to make comparisons in order to be able to choose. My mouth, however, placed higher than my eyes and bolder for having often spoken in my sleep, had moved ahead and mocked me: ‘Well, old identity­ monger, what did you see and recognize, you brave doctor of tautology? What could you recognize, tell me, along this unfamiliar road? An also­-tree or almost-tree, right? And now you are mustering your Latin for a letter to old Linnaeus? You had better haul up a pair of eyes from the bottom of your soul and put them on your chest: then you’ll find out what is happening here.’

Now I am a person who likes simple words. It is true, I had realised long before this journey that there was much evil and injustice in the world I had now left, but I had believed I could shake the foundations if I called things by their proper names. I knew such an enterprise meant returning to absolute naïveté. This naïveté I considered as a primal vision purified of the slag of centuries of hoary lies about the world. I remember a conversation with a friend about Kleist’s Marionette Theatre. How could one regain that original grace, which would become the heading of the last and, I suppose, loftiest chapter in the history of mankind?

It was, my friend held, by letting reason purify our unconscious inner life that we could recapture the immediacy of the beginning – which would in the end give meaning to our life and make it worth living. In this view, beginning and end were one, and a note of mourning for original sin was struck. The wall which separates today from tomorrow must be torn down so that tomorrow could again be yesterday. But what must we actually do now, in our own time, to reach timelessness, eternity, the marriage of tomorrow-and-yesterday? Reason, he said, must prevail. A bath in the aqua regia of intelligence must give their true (primitive) meaning back to words, hence to things, beings, occurrences. A tree must again be a tree, and its branch, on which the rebels of a hundred wars have been hanged, must again flower in spring.

Here my first objection came up. It was simply this: I knew that anything that happened was more than an addition to the given, more than an attribute, more or less difficult to remove from the essence, that it changed the essence in its very being and thus cleared the way for ceaseless transformation.

My friend was stubborn. He claimed that even in the stream of human evolution he could distinguish the constants of the soul, know the limits of the unconscious. All we needed was for reason to go down into the deep and haul the water of the dark well up to the surface. This well, like any other, had a bottom one could reach, and if only the surface were ready to receive the water from the deep, the sun of justice shining, the job would be done. But how can we ever succeed, he said, if you and people like you never come out of the deep, never stop communing with the dark springs?

I saw that this reproach was aimed at my professing that, since we know the world and its institutions are a prison for man and his spirit, we must do all we can to tear down its walls. At the same time, I saw which course this knowledge prescribed. I realised that man was not only languishing in the chains of external life, but was also gagged and unable to speak – and by speaking I mean the entire sphere of human expression – because his words (gestures, movements) groaned under an age-old load of false and distorted sincerity. What could be more dishonest than to claim that words had somehow, at bottom, remained the same! I could not help seeing that the ashes of burned-out meanings (and not only of those) had covered what had, since time immemorial, been striving for expression in man’s inner­ most soul.

How could something new and pure issue from this? It may be from the remotest regions of the spirit that words and figures will come, images and gestures, veiled and unveiled as in a dream. When they meet in their heady course, and the spark of the wonderful is born from the marriage of strange and most strange, then I will know I am facing the new radiance. It will give me a dubious look because, even though I have conjured it up, it exists beyond the concepts of my wakeful thinking; its light is not daylight; it is inhabited by figures which I do not recognise, but know at first sight. Its weight has a different heaviness, its colour speaks to the new eyes which my closed lids have given one another; my hearing has wandered into my fingertips and learns to see; my heart, now that it lives behind my forehead, tastes the laws of a new, unceasing, free motion. I follow my wandering senses into this new world of the spirit and come to know freedom. Here, where I am free, I can see what nasty lies the other side told me.

Thus I listened to my own thoughts during that last break, before facing the dangers of tramping the deep sea, of following Edgar Jené down underneath his paintings.

A Sail Leaves an Eye. One sail only? No, I see two. But the first one, which still bears the colour of the eye, cannot proceed. I know it must come back. Arduous, this return. All liquid has run out of the eye in the form of a steep waterfall. But down here (up there), the water also flows uphill, the sail climbs the steep incline of the white profile which owns nothing but this eye without a pupil and which, just because it owns nothing but this, knows and can do more than we. For this profile of a woman with hair a little bluer than her mouth (which looks up, diagonally, at a mirror we cannot see, tests its expression and judges it appropriate), this profile is a cliff, an icy monument at the access to the inner sea which is a sea of wavy tears. What can the other side of this face look like? Grey like the land we glimpse? But let us go back to our sails. The first one will come home, into the empty, yet strangely seeing socket. Perhaps the tide will carry it in the wrong direction, into the eye which stares out on the grey of the other side. Then the boat will bear tidings, but without much promise. And the second boat whose sail bears a fiery eye, a flaming pupil on a field, sable, of certainty? We enter it in our sleep: then we see what remains to be dreamed.

How many people know that the number of creatures is endless? That man created them all? May we even begin to count them? True, some know that you can give a flower to a person. But how many know that you can also give a person to a pink? And which do they consider more important? More than one will remain incredulous when you mention the son of Aurora Borealis.

Incredulous even today, when Berenice’s hair has been hanging among the stars for such a long time. However, Aurora Borealis does have a son, and Edgar Jené has been the first to see him. Where man is frozen and chained in the snowy woods of his despair, he passes by. Huge. Trees do not stop him. He steps across or takes them under his wide cloak, makes them his companions on the way to the city gates where people wait for the great brother. He is the one expected. We know it by his eyes: they have seen what all have seen, and then some.

What Edgar Jené gives shape to – is its home only here? Have we not all wanted to know better the nightmare of the old reality? Have we not wanted to hear screams, our own screams louder than ever, more piercing? Look, this mirror below us makes everything show its true colour. The Sea of Blood Covers the Land. Devastated and grey, the hills of life. With naked feet, the spectre of war goes through the land. Now it has claws like a bird of prey, now human toes. Many are its shapes. Which one is it wearing now? A tent of blood floating in the air. Wherever it comes down, we must live between walls and shreds of blood. Where blood yawns, we get a chance to look out and see more of the same shapes of steaming blood. And we are fed. One of the claws has drilled a well of blood. There we can also mirror ourselves, lost as we are. Blood in a mirror of blood, what greater beauty, they say.

Many oaths have we sworn in our waking lives, in the hot shadow of impatient flags, backlighted by an alien death, at the high altar of our sanctified reason. We kept our pledges at the cost of our secret life. But when we came back to where we had made them – what did we find? The colour of the flag was the same, the shadow it threw even larger than before. Again, people raised their hands. But to whom did they pledge allegiance? To the Other, whom we had sworn to hate. And death, the alien? It was so busy it had no need of our oaths at all. On the altar, finally, a cock, crowing.

Now let us try to make pledges in our sleep. We are forming a tower, our face breaking through at the top, our clenched stone face. Taller than ourselves, we tower above the highest towers and can look down on ourselves, on our thousand-fold climb upwards. What a chance: to gather in hordes up there to swear our oaths, a thousand times ourselves, a great, overwhelming force. We have not quite reached the top, where our face has  already become a clenched fist, a fist of eyes swearing. But we can see our way. Steep, the ascent. But if it is to tomorrow’s truth that we want to pledge allegiance we must take this route. And once up there! What a site for an oath! What a climb into the deep! What resonance for the pledge we do not know yet!

I have tried to report some of what I saw in the deep sea of a soul.