“What might begin as a space whose protest action aims to form humanising culture where Black disabled, trans, queer, and womxn’s bodies are safe and heard, is very quickly appropriated by the anti-blackness of up high – a force that polarises the complexity of oppression and attempts to direct and contain action into the physically violent (inherently colonialist) form that it understands best. In this sense, the state functions to direct the protest politik into the Afropessimistic voice, one that we know disinherits those who do not immediately come to mind when we say the word “black” (ie: black disabled, trans, queer, and womxn’s bodies) and one that abandons the pursuit of humanity, in favour of unhealthy martyrdom and recklessness.

“So apart from the predictability of state-sanctioned physical violence in the form of stun grenades, teargas, rubber bullets, arrest and jail time, it is important to understand this state provocation as incredibly strategic in the way it seeks to awaken retaliation in the same form. It begs us for physical retaliation – the kind that re-confirms black people as bodies, the kind that forces the “you can’t kill us all” mantra – basically the kind of protest that black able-bodied cis-heterosexual men happen to be good at leading and controlling, the kind that does not challenge structural power, but fulfils the fantasy of Fanon’s black man in replacing his white master.” 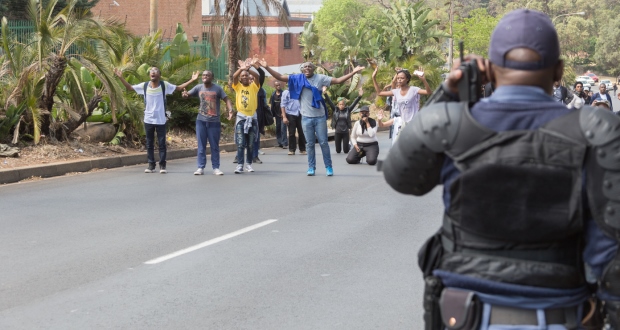