The following is excerpted from a feature essay on the LSE blog by Katie Collins, entitled “Woven into the Fabric of the Text: Subversive Material Metaphors in Academic Writing”. Collins proposes that we shift our thinking about academic writing from building metaphors – the language of frameworks, foundations and buttresses – to stitching, sewing and piecing. Needlecraft metaphors offer another way of thinking about the creative and generative practice of academic writing as decentred, able to accommodate multiple sources and with greater space for the feminine voice.
__
[W]hy do I regard switching from a metaphor of building to one of stitching as a subversive act? For several reasons. Throughout history, needlework has been a marker of femininity in its various iterations, a means to inculcate it, and something to sneer at as a way of shoring up women’s supposed inferiority. Theodore Roethke described women’s poetry as ‘the embroidering of trivial themes […] running between the boudoir and the alter, stamping a tiny foot against God…’ (165), for example. Women’s naturally nimble fingers were to be occupied; we were to be kept out of the way and out of trouble, shut in the top room of a circular tower and thus prevented from engaging in the masculine pursuits of politics, thinking, reading and writing and making Art (for a fascinating discussion on women, folk art and cultural femicide, I recommend this post by Dr Lucy Allen). The frills and fripperies our needles produced were ample evidence, should anyone require it, that we were frivolous creatures entirely unsuited to public life. Or so the story was. So using needlework metaphors in my academic writing blows a resonant raspberry to that notion, for one thing. But the subversion here is not as straightforward as reclamation, of presenting something usually disparaged as having value after all. Femininity and its inculcation is a displeasingly twisted yarn of benevolence and belittlement. The trick is to unpick the knots without snapping the thread and unravelling the beautiful work, to value that which has been constructed as feminine while at the same time escaping its constricting net. 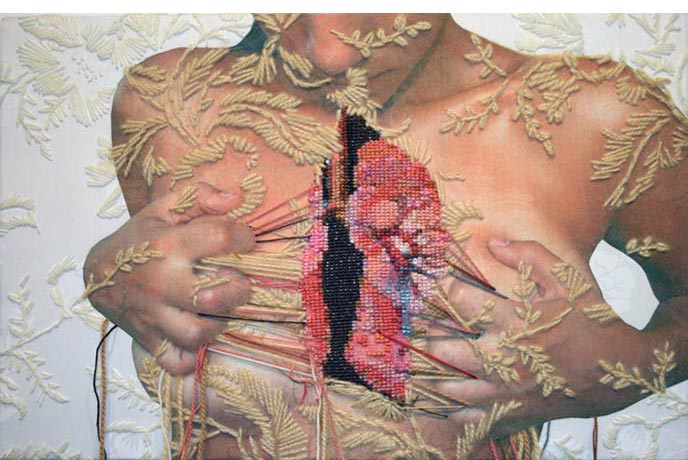 Imagining academic writing as piecing fragments is one way of recognising that it can integrate all sorts of sources but, more significantly, piecing is also a decentred activity. When quilting, one can plan, cut and stitch many individual squares whenever there is a moment spare, before bringing them together to form the overall pattern, which is flat and in aesthetic terms may have no centre or many centres, and no predetermined start or end. This holds true both for the practice of quilting and how we might think differently about academic writing, with each contribution not a brick in a structured wall but a square ready to stitch onto other squares to make something expected or unexpected, the goal depth and intensity rather than progress (see Mara Witzling). There is sedition here in several senses. This way of imagining how writing works is not individualistic or competitive. Each voice is a thread, and only when they are woven together do they form a whole, as Ann Hamilton’s tapestries represent social collaboration and interconnectedness; many voices not one, cut from the same cloth or different.

But acknowledging that one might have to fit the work of writing around other things, a problem that has occupied me from the moment I became a mother, is a particularly rebellious act, I think. As Adrienne Rich expresses in the poem ‘Transcendental Etude’:

Vision begins to happen in such a life
as if a woman quietly walked away
from the argument and jargon in a room
and sitting down in the kitchen, began turning in her lap
bits of yarn, calico and velvet scraps,
laying them out absently on the scrubbed boards
in the lamplight, with small rainbow-colored shells
sent in cotton-wool from somewhere far away,
and skeins of milkweed from the nearest meadow –
original domestic silk, the finest findings.

This way of imagining academic writing as something that is part of life, rather than something apart, challenges the view of the scholar as the extraordinary, solitary genius who sits alone in his study day after day while the minutiae of clothing and food is organised for him, around him, despite him. But with metaphors that emphasise the piecing of fragments, both everyday and exceptional, we recognise a way of working in which every fragment that can be pieced together into a square is ‘the preservation of a woman’s voice’.

Read the whole of this great essay by Katie Collins HERE. 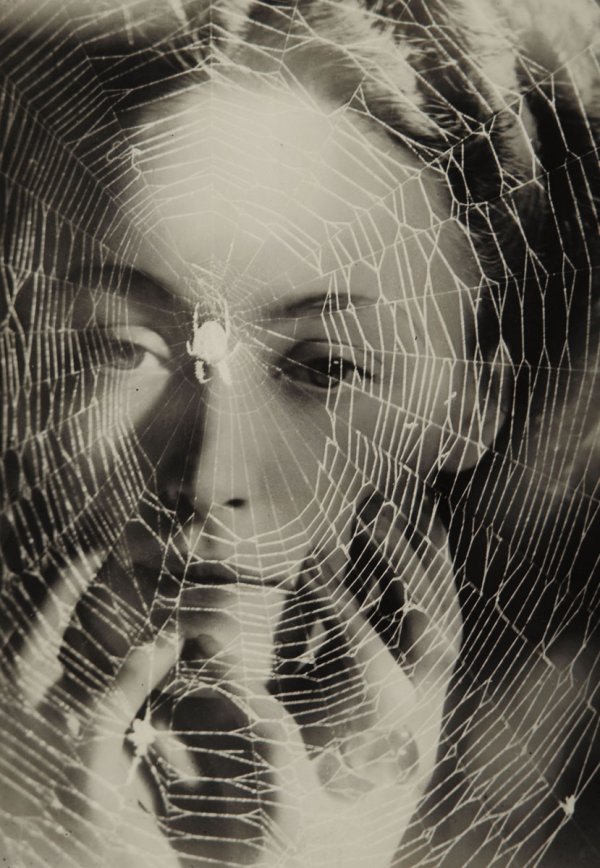 Excerpt from an article by Aya Lurie, from the exhibition catalogue: “The Naked Eye – Surrealist Photography in the First Half of the 20th Century”, 2013:

The languishing face of a strikingly beautiful young woman is seen behind a spider web. Is she trapped behind the web? Is she trapped in it? The spider may be lying in wait for her, and maybe she is on the prowl, with her manicured feminine hands, which call to mind the articulated legs of a spider. Perhaps it is rather the lurking time, as indicated by the title of the photograph, that threatens youth and beauty, serving as a reminder of their ephemerality.

The association between the woman and the spider dates back to Greek mythology, where it is embodied in the figure of Arachne, a weaver who made Athena jealous enough to turn her into a spider.1

In the history of culture, the figure of the “spider-woman” has come to be identified with the femme fatale — the archetype of the woman who leads to the downfall of the man attracted to her. In this context, Arachne is presented as a patient plotter who spins a web of schemes to trap and devour the reckless male.2  Dr. Ruth Markus, in her essay about the representations of the castrating woman in Surrealist art, ties the female praying mantis with the female “Black Widow” spider, which characteristically devour their males during or directly after the sexual act. She explains the Surrealist interest in the mantis and similar insects in that they represent the two primordial Freudian instincts: Eros and Thanatos.3

Dora Maar linked the photographed portrait by Man Ray with a manipulated image of a cobweb, to create the effect of transparent contours on the woman’s face in the final print. The resulting photomontage thus fuses the woman’s figure with the spider and its web. The Surrealists were drawn to the mimetic ability of various animals to camouflage themselves in nature, and created many works in which flora, fauna, and the inanimate merge and assimilate into one another.4 In the spirit of pantheist romanticism, this capacity was taken to represent an aspiration to eliminate the boundaries between man and nature, to the point of total fusion with the cosmos, which leads to absolute void. It is, in fact, a yearning for a primordial unconscious state, an existential state which precedes consciousness.

In the photograph in question, the paths of two of the most fascinating women who operated among the Surrealists cross. Photographer Dora Maar (born as Henrietta Theodora Markovitch) was a talented artist in her own right, but her fame came mainly from her relationship with Pablo Picasso, her partner, who often depicted her figure. In addition, Maar also modeled for Man Ray in some of his prime photographs…

… The model in Maar’s photograph is Nusch Éluard (1906–1946, née Maria Benz), a German show dancer who, in 1934, married poet Paul Éluard, one of the kingpins of Surrealism, after his first wife, Gala, left him for Salvador Dalí… Nusch Éluard also served as inspiration for her husband’s poetic work, and he combined her photographs in his books of poetry as elaboration and illustration for the written text.

I’ve always found the hairs on insects and spiders interesting .. even tiny little ants got them ..