My dear Mary – I had a long rest in the country with Syrian friends, a rich man with a great heart and a woman with both a beautiful soul and face. They both love poetry and poets. The town in which they live is like a large garden divided into little gardens by narrow paths. From a distance the houses with red roofs look like a handful of corals scattered on a piece of green velvet.

I am painting, or I am learning how to paint. It will take me a long time to paint as I want to, but it is beautiful to feel the growth of one’s own vision of things. There are times when I leave work with the feelings of a child who is put to bed early. Do you not remember, dear Mary, my telling you that I understand people and things through my sense of hearing, and that *sound* comes first to my soul? Now, dear Mary, I am beginning to understand things and people through my eyes. My memory seems to keep the shapes and colours of personalities and objects…

… It is almost midnight. The woman with the sweet voice, in the opposite studio, is no longer singing her sad Russian songs. The silence is profound. Good night, dear Mary. A thousand good nights from
Kahlil

When I am unhappy, dear Mary, I read your letters. When the mist overwhelms the “I” in me, I take two or three letters out of the little box and reread them. They remind me of my true self. They make me overlook all that is not high and beautiful in life. Each and every one of us must have a resting place somewhere. The resting place of my soul is a beautiful grove where my knowledge of you lives.

And now, I am wrestling with colour: The strife is terrible, one of us must triumph! I can almost hear you saying, “And what about drawing, Kahlil?” and Kahlil, with a thirst in his voice says, “Let me, O let me bathe my soul in colours; let me swallow the sunset and drink the rainbow.”

The professors in the academy say, “Do not make the model more beautiful than she is,” and my soul whispers, “O if you could only paint the model as beautiful as she really is.” Now what shall I do, dear Mary? Shall I please the professors or my soul? The dear old men know a great deal, but the soul is much nearer.

It is rather late, and I shall go to bed now, with many thoughts in my heart. Good night, dear Mary. God bless you always.
Kahlil 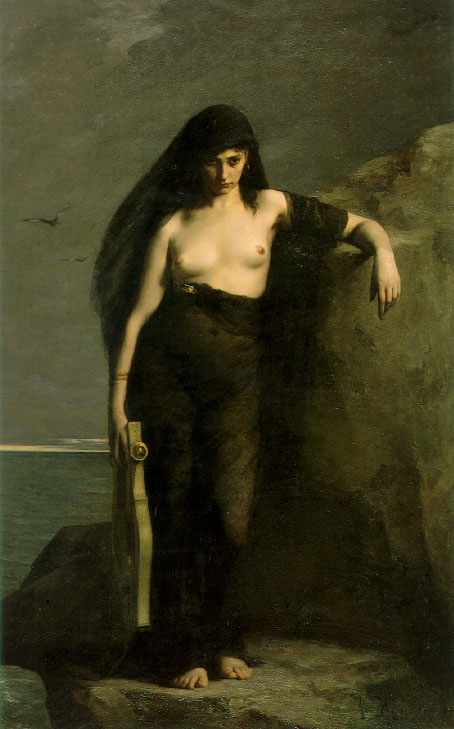 Hither now, O Muses, leaving the golden
House of God unseen in the azure spaces,
Come and breathe on bosom and brow and kindle
Song like the sunglow;

Come and lift my shaken soul to the sacred
Shadow cast by Helicon’s rustling forests;
Sweep on wings of flame from the middle ether,
Seize and uplift me;

Thrill my heart that throbs with unwonted fervor,
Chasten mouth and throat with immortal kisses,
Till I yield on maddening heights the very
Breath of my body.

~ from The Poems of Sappho: An Interpretative Rendition into English, translated by John Myers O’Hara, 1870-1944.

More about her life and poetry : The Tenth Muse

An excerpt from Joshua Billings’ paper entitled Hyperion’s symposium: an erotics of reception.

Diotima of Mantinea is a present absence in Plato’s Symposium. Her words form the most important of the symposium’s encomia to Eros, but she does not speak them herself. Socrates, her former pupil, relates her lesson in erotics to the assembly. She remains a mysterious figure: her name — ‘honoured by god’ — and her city, cognate with mantis, place her somewhere between human and divinity. Though the main narrative of the Symposium is doubly framed — it records the words of Apollodorus who recounts what he heard from Aristodemus — Diotima is still further removed from the literary present. She exists (if she exists at all) as a liminal, ambiguous being. But this is appropriate to her subject: Eros, a god characterized by perpetual incompleteness.

The Diotima of Friedrich Hölderlin’s Hyperion or the Hermit in Greece (Hyperion oder der Eremit in Griechenland), too, seems poised between being and non-being. As the title character’s beloved, her existence forms the hinge of the entire narrative, yet the pages in which she appears are relatively few and in them, she is most often passive and silent. Most formative for Hyperion, indeed, is her seemingly unmotivated death, reported at second-hand. The form of the novel, a series of retrospective letters from Hyperion, serves to heighten her absence just as the Symposium’s framing places its narrative in a doubly-remembered past. Hölderlin’s Diotima, like Plato’s, exists in eternal mediation, suggesting that Hyperion’s desire cannot be fulfilled, his ideal never realized.

This is the lesson of Diotima in the Symposium. In contrast to the previous speakers, Socrates emphasizes not the positive qualities of Eros, but the poverty that drives the god to seek beauties he does not possess. Socrates reports the speech of Diotima, who disabused him of the notion advocated by his friends. The Eros described by Diotima is liminal, neither beautiful nor ugly, and neither man nor god. He is a daimôn, whose existence is defined by his place between opposing realms. His power is

Eros is always relational, a mediation between two elements. This is a consequence of his birth, as the child of Penia and Poros, need and resource. Like his mother, he is unattractive and perpetually impoverished, yet he has the skills of his father that allow him occasionally to attain his desire. This makes him a paradox, poor but able to become rich, immortal but able to die: ‘sometimes he flourishes for a day and lives, whenever he has resources, and sometimes he dies, but is brought back to life again through the nature of his father.’ Eros is not a happy medium of his two parents, but an unstable oscillation between states of euporia and aporia.

Eros’ dialectical nature makes him philosophical, and distinguishes him from his parents. Those who are wise (like Poros) feel no need to philosophize, while those who are ignorant (like Penia) cannot comprehend their need. Eros’s philosophical nature is based on reflection; it results from the recognition of his own ignorance. Philosophy is a state of intellectual poverty that uses resource to gain insight:

Being a philosopher he is between a wise man and an ignorant. The cause of this is his birth: for he is from a wise and resourceful [euporos] father, and an unwise and unresourceful [aporos] mother.

The connection of philosophy and desire suggests a productive nature of Eros, a way it escapes the constant oscillation between want and fleeting fulfilment. As we have already learned, Eros is unable to possess what it desires permanently. Instead of possession of the beautiful, Eros seeks to reproduce with the beautiful:

– Eros, Socrates, she said, is not of the beautiful, as you think.

– Of begetting and bringing forth on the beautiful.

– It is so absolutely, she said. And why is it of begetting? Because begetting is eternal and undying as far as it is possible for a mortal. From what we have agreed, it is necessary that with good one desire immortality, if indeed eros is of the good being one’s own always. It is necessary from this very account that eros be also of immortality.

The account of Eros’ activity here changes abruptly: Eros finds a way out of lack, to a creative activity. This also necessitates a redefinition of Eros as desire, not for the beautiful or the good, but for an eternal existence. In place of possession, Eros turns to production. This is the crux on which Hölderlin’s reading of the Symposium will focus, as nostalgia for a lost ideal is transformed into the realization of future possibility. This dynamic constitutes what might be termed an ‘erotics of reception’.

The margins of the forest are beautiful,
as if painted onto the green slopes.
I walk around, and sweet peace
rewards me for the thorns
in my heart, when the mind has grown
dark, for right from the start
art and thinking have cost it pain.
There are lovely pictures in the valley,
for example the gardens and trees,
and the narrow footbridge, and the brook,
hardly visible. How beautifully
the landscape shines, cheerfully distant,
like a splendid picture, where I come
to visit when the weather is mild.
A kindly divinity leads us on at first
with blue, then prepares clouds,
shaped like gray domes, with
searing lightning and rolling thunder,
then comes the loveliness of the fields,
and beauty wells forth from
the source of the primal image.

Hölderlin’s work, like Celan’s after him, is a practice of creating the universality of music out of the treacherous medium of words. The frisson of this practice is an impossible, and irresistible, place to live and die. Like Orpheus, Hyperion keeps looking back. And like Orpheus, Hölderlin the poet relives the moment of his lost love in a melodious, maddening loop.