Filmed in 2011 at Mary Reid Kelley’s home and studio in Saratoga Springs, New York, the video artist and painter discusses her video work “You Make Me Iliad” (2010). In researching the lives and experiences of women who lived during the first World War, Reid Kelley was struck by how few first-hand accounts she was able to uncover. Mary Reid Kelley explains her attempts to reconstitute an experience that would have otherwise been lost to history by creating an imagined narrative involving a prostitute, a soldier, and a medical officer.

In black-and-white videos and drawings filled with punning wordplay and political strife, Mary Reid Kelley presents her take on the clash between utopian ideologies and the realities of women’s lives in the struggle for liberation. Performing scripted narratives in rhyming verse— featuring characters such as nurses, soldiers, prostitutes, and saltimbanques—Reid Kelley playfully jumbles historical periods to trace the ways in which present concerns are rooted in the past. 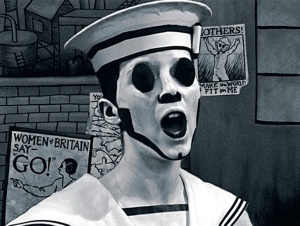 Sadie, the Saddest Sadist (7 minutes, 23 seconds), 2009, is set in Great Britain in 1915, according to a free booklet that includes the video’s lyrics. The title character, a munitions worker, wants to learn a trade “so [she] could be a traitor.” She meets Jack, a sailor (played by Reid Kelley in drag), and with “passions inflamed,” she requests rousing war stories. His sung reply: “Calm down sweetheart / Britannia rules the waves.” In pledging herself to him, she offers her “surplus devotion,” and after their off-camera tryst, she sings, “The stains on my sheets / will come out with some lemon / I know that you care / by these Marx on my Lenin.” Live action alternates with stop-motion animation in which dancing refrigerator magnet-style letters spell out the dialogue or toy with it, as when “surplus devotion” is anagrammatized into “spurs devolution.”…

… Reid Kelley’s interest seems to be primarily in historical material, expressed in details such as the patriotic flyers that hang on the walls behind Sadie and Jack when they meet, which urge citizens to conserve food and to fight for king and country. Her fine ear for popular verse makes Reid Kelley’s work rich fun for those who are, as Jack describes himself, “verbally inclined.”