Manifold is an audiovisual artwork made for the 2017 Edge of Wrong festival.

([Inaudible] text for our performance at Edge of Wrong tomorrow night.)

a bus stop. it is raining, minimal visibility so the sounds are amplified, almost threatening. not really seeing where the sound is coming from…or seeing what is making it…grinding metal, gaping mouth. colliding, hurtling, braking to avoid. I wait…my head is busier than my body in that moment. and moments similar to these always draw out thoughts of suffering, mortality, irrational fear, my loved ones dying painfully. the idea of being alone seems squared, cubed, today. waiting offers no solace, no purpose… especially when you are drenched, your shoes are squelchy. a dim floating orange comes floating through the hazy emptiness, the led display on the front of this bus is illegible but the glow is not long enough to suggest that it is going to my destination. it stops…grinding metal, the scent of brake fluid, badly maintained machinery. a door creaks open, outdated hydraulic movements. for the first time this morning, I catch a glimpse of something that reminds me of interaction. someone on the bus uses their hand to open a gap on the window. for a moment, just as the bus pulls away, their hand stops circling against the glass. I feel exposed, seen and wonder whether raising my hand in a wave would be the appropriate reaction. the bus disappears into the now empty haziness.

The Edge of Wrong invites you to join us for our twelfth annual festival of experimental, uncompromising and dangerous music.

In collaboration with Contour Vinyl we will also be launching our first vinyl series: 12 highly limited lathe-cut 7″s containing exclusive works by the artists performing at the festival. These 7″s, each available in a micro-run of only 10 copies, will be available for purchase at our 2017 events.

“An edge is a special kind of being-in- place; it marks the transition between something and nothing. Edges are limits, and also shape-defining margins. To be at the edge is to exist in the “in” of the “in-between,” in the instant between one time and another. An edge cuts and changes whatever it encounters. It is where movement must stop or turn in a different direction; it is where people plummet into the abyss, or learn to fly. Things end, and begin, at this place—but nothing stays at the edge forever. Edges mark the boundaries of empty space, but they also represent the transformational places where new possibilities open up again.” – David Novak, Japanoise: Music at the Edge of Circulation

Giraffes don’t Whistle is a silent karaoke video installation made in collaboration with the students of Brendon Bussy’s class at the Dominican School for Deaf Children.
The videos will explore the relationship between dream, landscape, night activities and perceived sounds from the narratives of the participants.

Marius Stocking Blues is an experimental sound installation consisting of a self made busker organ.
The organ plays automatically by using a handle and based on a traditional Norwegian knitting pattern called the Marius pattern.
The knitting pattern used in the project is translated into braille, a script for blind people. Inspiration for the project is taken from phonography, cryptography, geometry, mosaic and textiles. The work relates to older forms of communications like for example telegraphy, smoke and light signals, but also has similarities to early computer technology.

R100 suggested cover charge per event (more or less according to means).

Right of admission reserved. Cellphones to be switched off during performances.

STUFF TO BRING: A comfy cushion you don’t mind getting dirty. Your own drinks. An open mind.

A BIT MORE ABOUT EOW:

HUNTER THOMPSON ONCE SAID that there is no honest way to explain the edge, “because the only people who really know where it is are the ones who have gone over.”

It is a kind of hidden place that is revered and feared by some – the hellish underbelly of the world. Yet it is also a place searched for, written about, and found in the music of the strange. And it is this edge we want to bring to you by creating a space which allows musicians to etch out the edge of wrong, pushing the boundaries so that new sounds might be found.

The EDGE OF WRONG festival is currently in its twelfth year and serves mainly to facilitate cultural exchange. Though it has become an established production network it is forever evolving, intent on creating a sustainable environment for quality art of an exploratory nature.

Perfection is death, as it leaves nothing to be desired.

Chantelle’s movements are captured by a 3d motion sensor and translated live into controller data for a musical piece written in Supercollider by Aragorn Eloff.

Entrance is pay-what-you-can (recommended donation R50) and you can bring your own refreshments. Please make sure you arrive by 7:30 to minimise disruptions during performances.

Coila-Leah Enderstein is a classically trained pianist based in Cape Town. She’s into in experimental new music and interdisciplinary performance.

daniel gray is an artist from johannesburg and now lives in cape town. he is currently working as a high school maths teacher. he is interested in sound as image, dreams, collective improvisation and chance processes. in 2014-2016 he released an audiovisual album called “fantasmagoria”, a noise/peace album called “mssapessm”, took part in GIPCA live arts festival, performed around cape town, formed the now defunct subdwellers dj collective, started primitive ancestor records – a net label, to name a few of the many noisy endeavours. this will be the third edge of wrong event that he has participated in.

Justin Allart is a highly prolific experimental/noise musician who performs using a motley array of non-musical instruments. Expect sandpaper on turntables and effects pedals talking to themselves.

Aragorn23 is an experimental musician based in South Africa. His current work focuses on algorithmic and gestural composition and the use of the body as an instrument. He will be performing alongside collaborators Chantelle Gray and Amantha on the evening.

‪#‎Musichacklab‬ at ‪#‎EdgeofWrong‬‪ #‎EOWct11‬. I’ve found a smashing way to exorcise writer’s block. Tambourine with contact mic I made on Saturday, Scrabble letters, and an overdrive pedal.  👊🌟 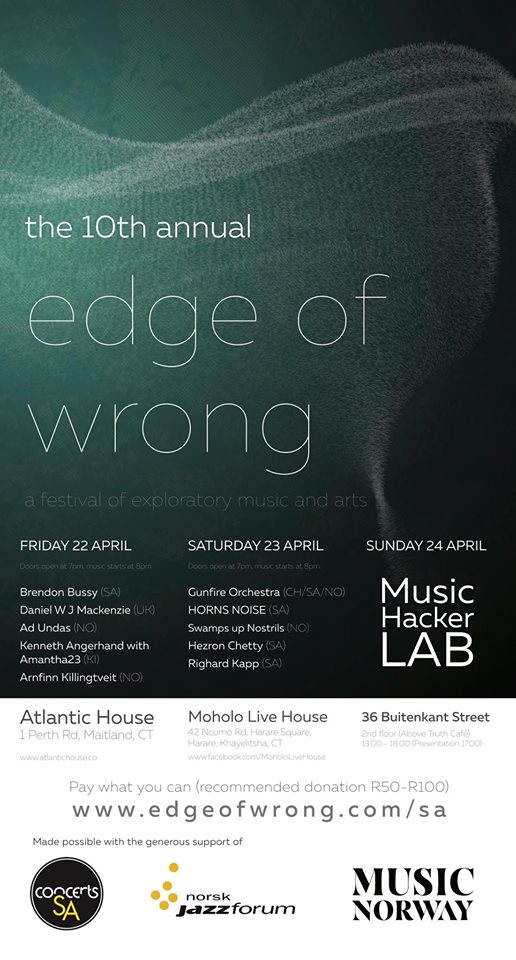 Listen to this with speakers that have proper bass (not in crappy earphones) for a full body experience.

In 2006 the Paris recording label shiiin released a CD recording of L’île re-sonante, a 55-minute composition by French electronic music pioneer Eliane Radigue, a student of electroacoustic composers Pierre Henry and Pierre Schaeffer in the 1950s.

L’île resonante features the instrument Radigue has worked with since the early 1970’s, the ARP 2500 modular synthesizer and her medium of choice, analog multitrack tape. The piece is characteristic of her work in that it is a tapestry of long, gradually evolving drones created with oscillators on the ARP synthesizer and with tape loops.

According to Daniel Caux’s liner notes, “For L’ile re-sonante, Eliane Radigue drew her inspiration from an image: an island in the waters of a lake that reflect her face. It is both a ‘real’ image and an optical illusion”.

From Invocation Of The Aural Slave Gods (Blossoming Noise, 2005).

Pascal Comelade live in concert at Teatre Bartrina de Reus, circa 2007. I hope I one day get to experience one of this man’s performances.

If you’re in Johannesburg tonight, take yourself to the Edge! 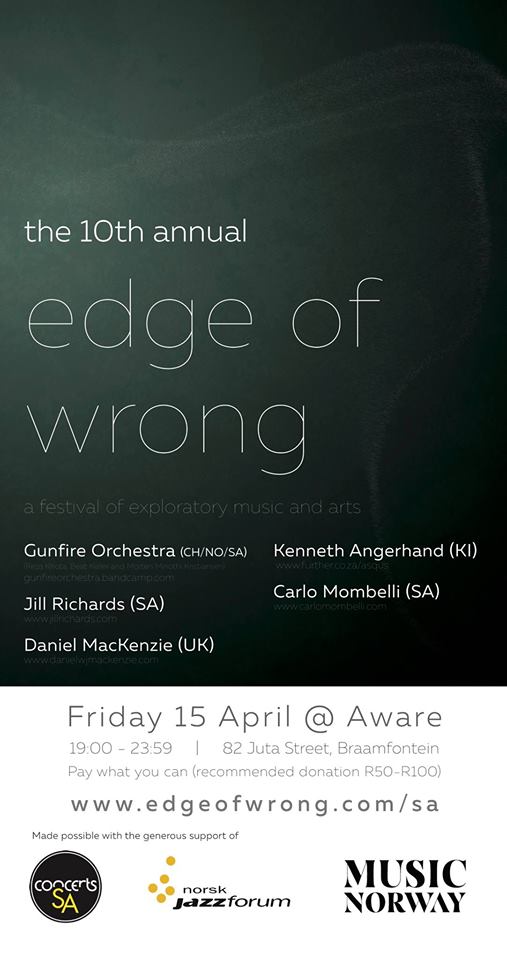 Read more about the festival and artists performing tonight HERE.

As part of the Edge of Wrong organising team, I’d like to invite you to join us for our tenth annual music festival, happening in Cape Town on the 22nd and 23rd of April (with a mini edition in Johannesburg on 15th April) and featuring an array of international and local artists presenting a wide range of experimental, uncompromising and dangerous music.

Expect everything from feedback guitar and malfunctioning drum machines to improv violin, dance-controlled piano and walls of screeching noise from hand-built instruments.

GENERAL INFO: Right of admission reserved. Drinks will be available for purchase at the venues. Cellphones to be switched off during performances.

Performing in Johannesburg on the 15th are:

I’m on the organising team for the Edge of Wrong. Join us in Cape Town next week – it’s going to be an exhilarating ride!

It’s been a busy six months for EOW. Last October’s event saw noise artists, opera singers, free jazz, chiptunes and the sound of the Ebola genome perform at a metalworks. In January, we hosted a performance of Terry Riley’s In C for two laptops, improvised analogue synth, a postrock/drone quintet, and a memorable moment under a highway bridge with cello and saxophone accompanying traffic noise.

Now, we invite you to join us for our flagship event, the annual Edge of Wrong festival: five days from 25 to 29 March 2015, featuring a diverse range of international and local artists, each of whom epitomises our ethos of encouraging experimental, uncompromising, dangerous music.

The festival will unfold over several days at a number of venues (including a spontaneous flashmob orchestra in the central city which you can join) so be sure to check out the details on our Facebook event page. You can choose between buying tickets for individual events or an all-access pass for the week.

I’m part of the South African curatorial/organising team for this series of collaborative multi-medium performances. If you’re in Cape Town, check EOW 9.1 out tomorrow night.

Righard and Gareth will be playing together tonight at this year’s EDGE OF WRONG.